The recent LDN Functionals event at Jane Street was a sell-out with a waiting list, so thankfully Functional Works arranged another packed evening of talks on 2nd August. Yaron Minsky, Sebastian Funk and our own KC Sivaramakrishnan all spoke to an active crowd. 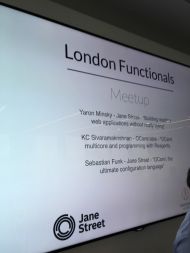 The three speakers for the night 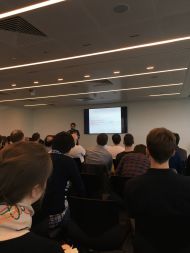 Yaron Minsky speaks to a packed room about Incremental

Jane Street was once again a stunning venue, and we were lucky to have Yaron Minsky visiting from NY to share his FP wisdom. He started the evening off with a presentation entitled “Building Reactive Web Applications Without Really Trying”, looking at the commonalities between and reactive web apps, neatly summarising these articles from the Jane Street Tech Blog.

The evening of talks was rounded off with OCaml, with Sebastian Funk heralding OCaml as the ultimate configuration language, with lively pizza-fuelled chat continuing late into the night. These are great events to attend, and we’d encourage everyone interested in FP (and especially OCaml) to join future meetings.