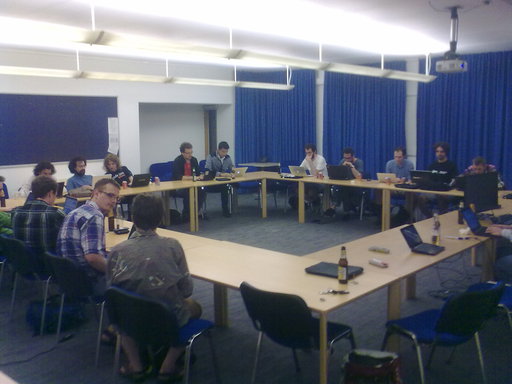 The first OCaml Labs compiler hacking session brought together around twenty people from OCaml Labs, the wider Computer Lab, and various companies around Cambridge for an enjoyable few hours learning about and improving the OCaml compiler toolchain, fuelled by pizza and home-made ice cream (thanks, Philippe!).

We benefited from the presence of a few experienced compiler hackers, but for most of us it was the first attempt to modify the OCaml compiler internals.

The first surprise of the day was the discovery that work on the list of projects was underway before we even arrived! Keen collaborators from The Internet had apparently spotted our triaged bug reports and submitted patches to Mantis.

There was an exciting moment early on when it emerged that two teams had been working independently on the same issue! When Jon Ludlam and Euan Harris submitted a patch to add a get_extension function to the Filename module they found that they had been pipped to the post by Mike McClurg. There's still the judging stage to go, though, as the patches wait on Mantis for official pronouncement from the Inria team.

Vincent Bernardoff also spent some time improving the standard library, fleshing out the interface for translating between OCaml and C error codes, starting from a patch by Goswin von Brederlow.

Stephen Dolan looked at a long-standing issue with names exported by the OCaml runtime that can clash with other libraries, and submitted a patch which hides the sole remaining offender for the runtime library. As he noted in the comments, there are still a couple of hundred global names without the caml_ prefix in the otherlibs section of the standard library.

There was a little flurry of work on new command-line options for the standard toolchain.

A Mantis issue submitted by Gabriel Scherer suggests adding options to stop the compiler at certain stages, to better support tools such as OCamlfind and to make it easier to debug the compiler itself. The Ludlam / Harris team looked at this, and submitted a patch which provoked further thoughts from Gabriel.

Vincent looked at extending ocamldep with support for suffixes other than .ml and .mli. Since the issue was originally submitted, ocamldep has acquired -ml-synonym and -mli-synonym options that serve this purpose, so Vincent looked at supporting other suffixes in the compiler, and submitted a patch as a new issue.

The OCaml top level has a simple feature for setting up the environment — when it starts up it looks for the file .ocamlinit, and executes its contents. It's sometimes useful to skip this stage and run the top level in a vanilla environment, so David Sheets submitted a patch that adds a -no-init option, due for inclusion in the next release.

Error handling issues saw a good deal of activity. Raphaël Proust submitted a patch to improve the reporting of error-enabled warnings; David investigated handling out-of-range integer literals and return-code checking of C functions in the runtime, leading to some discussions on Mantis. Stephen submitted a patch to improve the diagnostics for misuses of virtual. Gabriel Kerneis and Wojciech looked at some typos in ocamlbuild error messages, and Mike opened an issue to clarify the appropriate use of the compiler-libs package.

The open operation on modules can make it difficult for readers of a program to see where particular names are introduced, so its use is sometimes discouraged. The basic feature of making names available without a module prefix is rather useful, though, so various new features (including local opens, warnings for shadowing, and explicit shadowing) have been introduced to tame its power. Stephen looked at adding a further feature, making it possible to open modules under a particular signature, so that open M : S will introduce only those names in M that are specified with S. There's an initial prototype already, and we're looking forward to seeing the final results.

The second language feature of the evening was support for infix operators (such as the List constructor, ::) for user-defined types, a feature that is definitely not in any way motivated by envy of Haskell. Mike's prototype implementation is available, and there's an additional patch that brings it closer to completion.

The next session is planned for 6pm on Wednesday 18th September 2013 at Makespace, Cambridge. If you're planning to come along it'd be helpful if you could add yourself to the Doodle Poll. Hope to see you there!